I’ve just recently become the proud owner of a Braun Silk Epil 9 model, specifically the Braun 9561. As it also says on the box it’s an epilator for legs, body, and face. 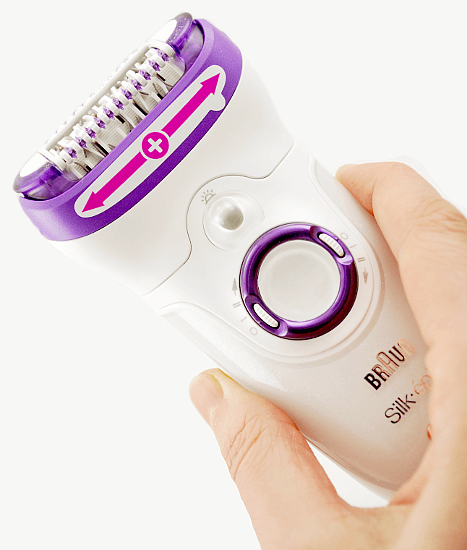 It’s exactly what I wanted because I also want to see if I can give up my facial waxing strips and just use the epilator for top to bottom. You’ll find out in a minute what was the result.

As you probably know, the Silk Epil 9 series is the latest one from Braun, following the 7 series.

What I want to say is this:

If you already own a Silk Epil 7 model there’s no point in getting a Braun 9 because they’re very similar.

The shape and the positioning of the tweezers has been changed but the number has remained the same (40 tweezers), both are wet & dry epilators, the accessories have remained the same, and the battery life is the same.

Obviously, the Braun 9 is so much prettier. It’s a gorgeous epilator and even my boyfriend said that and he doesn’t have a clue about these things.

I’m mainly directing my review towards women and men who don’t have an epilator and want one of the best on the market and to those who want to change their old one and catch up with what technology has to offer.

Why I Bought the Braun Silk Epil 9561

If you cannot find the Braun 9561 you can buy the 9579 model, they’re practically identical. If both of them are available, get the cheaper one.

My epilator doesn’t have the cleansing brush for facial exfoliation. I already have one that I use frequently so I decided to save some money and get the 9561.

The device is the same for the entire series. The different many models are only differentiated by the accessories that come with the epilator. 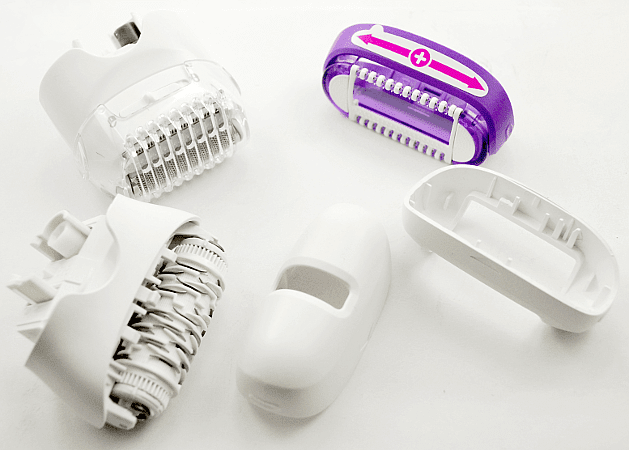 I have quite a lot of them, some that I’m definitely not going to use:

I also have a cleaning brush and a pouch.

I’ve tried the trimmer cap and it was surprisingly good but I’m not an expert on trimmers. Anyway, I liked it. I’m guessing the shaver is pretty good too but nothing exceptional. 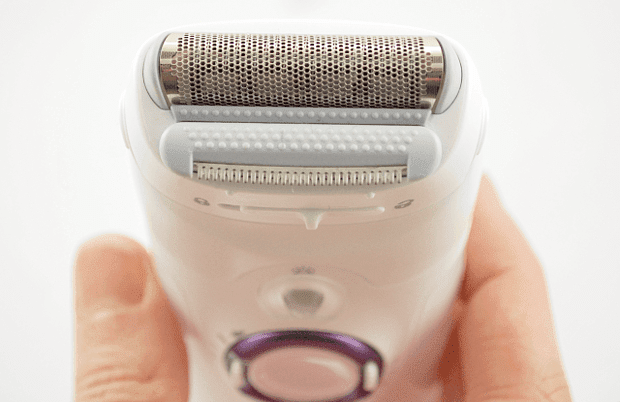 If you want to use the shaver and the trimmer, read the instructions that are included in the user manual.

I’ve tried the charging stand just for about 20 times. In the manual it says to charge it fully for maximum power but I haven’t had time to do that yet. I’ll definitely start doing that from now on. 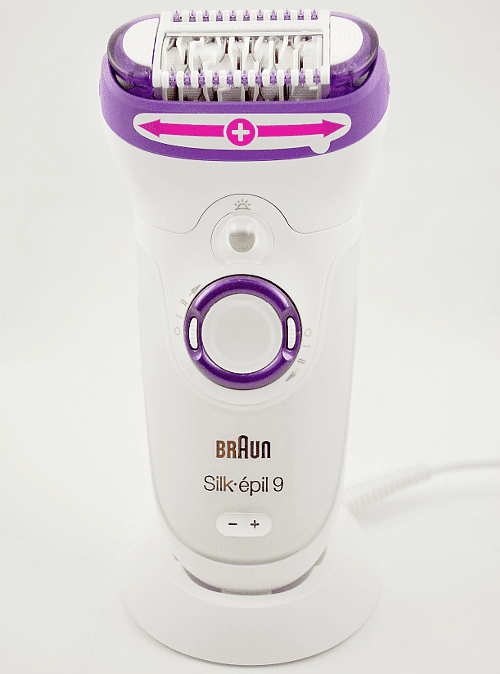 When the epilator starts to run out of power, a red light flashes. When you charge it, a green light flashes. It shines permanently when it’s fully charged.

I’m satisfied with the battery life because I used my Braun Silk Epil 9 for 30 minutes to epilate my legs, without charging it fully, and it was still going strong.

From the caps, I’ve tried them all.

You’ll have to scroll down if you want to find out about my experience with each of them – the facial, the massage cap, and the skin contact cap.

I recommend reading the manual, studying especially the pictures featured in the beginning. There’s only 3 pages for each language but it’s good to know what it says in there.

How Long it Took to Epilate my Legs 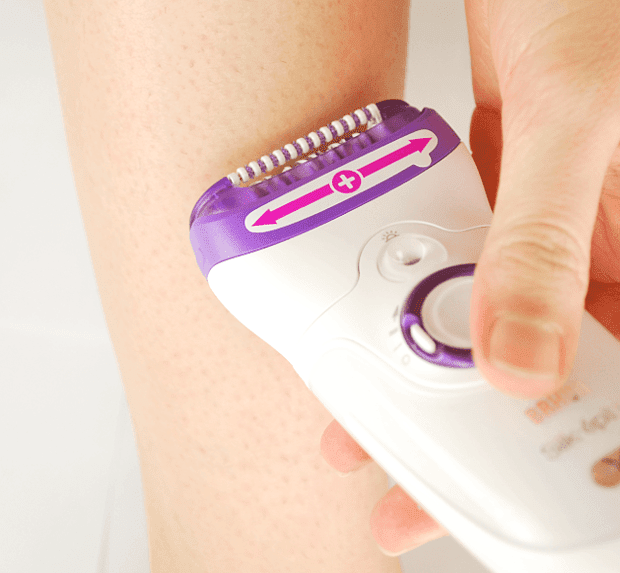 I’ve never actually timed how long it took to epilate my legs with any of my previous epilators. I just had a vague idea.

However, I wanted to share this particular detail with you because it’s a thing that many women wonder about. It’s an important aspect because when talking about epilators in general, there are women who complain that it takes too long.

Epilation is not as fast as shaving is but it also offers longer results, a smoother free-of-hairs skin for an average of two weeks. And if you add up all the time that one spends shaving in two weeks or three weeks’ time I’m sure the results are pretty close.

It took me about 30 minutes to epilate my legs, starting from my toes (I get hair on them too) up until my bikini line.

I used the skin contact cap right up until the knees. 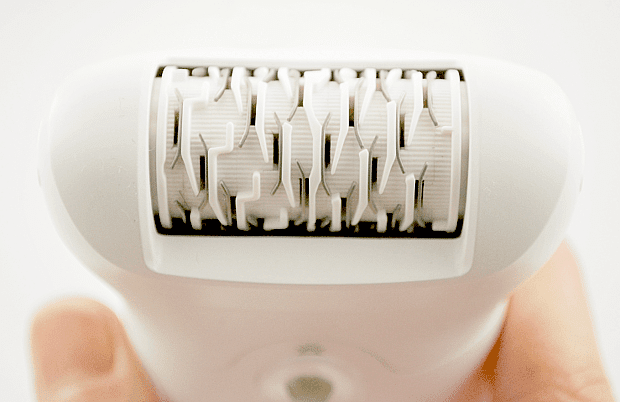 The skin contact cap lets the tweezers make direct contact with the skin. It means that tiny hairs are grabbed, too.

On the upper legs I used the massage rollers. That’s a sensitive area for me. The rollers aren’t as efficient, there were times when I need three passes, but they’re helpful. I like them.

You might think that it took me too long but you don’t know the rest of it.

The thing is that I’ve had my Braun 9561 for about a week but I’ve been too busy (lazy) to test it. I ended up letting my hairs grow unintentionally for at least three weeks.

Obviously, it was painful but for the amount of hairs that I had I think it was really fast.

But that’s not all.

I’ve Tried My Braun Silk Epil 9 in the Shower

Let me tell you how it all happened.

I just stayed under moderately hot water for about 5 minutes, just enough time to wash my hair.

I considered it enough time because I was already getting bored. I don’t have a lot of patience.

I took my epilator and began epilating my underarms, the massage cap on. 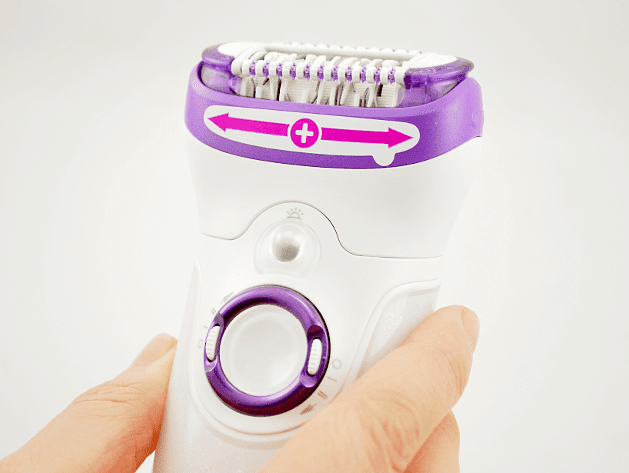 The armpits have always been a really sensitive area for me. The epilation hurt pretty much the same even under water. Probably because I stayed so little under the running water that my pores didn’t have time to open. After all, even my mirror wasn’t fogged up.

Even though the pain was pretty much the same, which was probably my fault, my Braun 9561 was fantastic. It was so fast that even the pain wasn’t that important. I concentrated my attention on how fast it removed the hairs.

My hairs were sticking to the skin from the water but it still managed to remove them without any difficulty.

I managed to miss two hairs on my left armpit (my sight is nothing to brag about).

After hopping out of the shower, at a close inspection, I noticed that there were some really tiny fine hairs left. I don’t think that my Braun 9561 broke the hairs.

I think that those were really tiny hairs that were just starting to grow.

I was thoroughly satisfied with how my underarms looked after.

The skin reddened just a bit. My skin isn’t at all sore because the hairs were removed from the first pass. I didn’t have to insist on certain hairs because there are no stubborn hairs when you’re using such a powerful epilator. Braun 9561 is really powerful and it didn’t damage my skin.

Well, bear in mind that I’ve been epilating for many years. Don’t expect the same minimal redness after your first epilation if you’ve used shaving before.

After that I removed the massage rollers and washed the hairs away under the shower by manually rotating the tweezers. No hairs were stuck.

How it Behaves as a Facial Epilator

It was the last cap that I had to use. The last function. 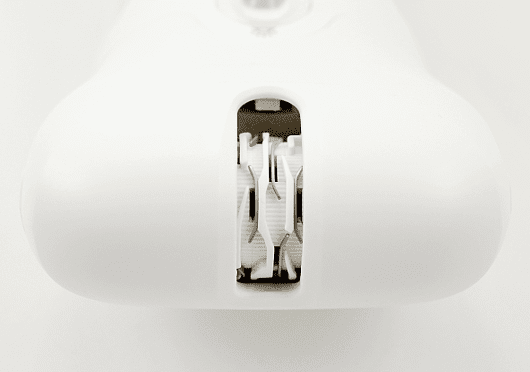 To be completely honest I was a little nervous. I didn’t want to be disappointed by my new pretty expensive epilator that can remove hairs from the entire body plus face. I wanted that “plus face” to be true.

In the middle of the night I plucked up my courage and I removed the epilator from its pouch together with the facial cap. I attached it and turned the epilator on on the first speed.

It was a weird experience. It was pain with a little tickling but mostly pain. I felt like I didn’t know how to move the epilator around my upper lip.

It was completely new but I went on using the epilator and getting better and better.

You have to press it a little against the skin because the facial cap covers a lot of the tweezers, most of them. There are only a few tweezers uncovered.

I turned it off a few times to check the progress. I was thrilled with my new facial epilator.

My upper lip hairs are really fine, they are really thin and short. I was afraid that the tweezers won’t be able to grab those tiny hairs and pull them out from their root. But to my surprise, relief, and joy they did.

I wanted to see if I can use the massage rollers to get it all done faster. It felt a little too painful for my taste so I switched back to the facial cap and finished removing my upper lip hairs. I didn’t switch to the second speed. I think that for the face the first speed is better, at least in my case.

The conclusion is that I’m giving up on using facial waxing strips because I was pleased with how my Braun Silk Epil removed those tiny hairs and how fast it was. Also, I was surprised to observe that it doesn’t feel bulky.

I’m sure that next time is going to be a lot easier and slightly less painful. Everything gets better with practice.

I’m really glad that I tried the facial cap. It’s easy and fast.

How Painful It Really Is

I’m pretty sure that none of you expects to hear that it wasn’t painful.

It definitely was and it didn’t help either that my hairs were longer than recommended. Removing facial hair with an epilator for the first time was also painful.

The good news is that the Braun Silk Epil 9 series is really fast and powerful. You don’t have to endure the pain that long. I love that.

No hairs get stuck, the brush reaches a lot of places so start with the cleaning brush first. After that wash it under running water, rolling the tweezers manually to get all the hairs out. Shake it and leave it for a day or two to dry.

From time to time I also wash the tweezers and the caps that I’m using with alcohol. I like doing that once a month, once every two epilation sessions.

Want to know the best part?

I have no complaints about this epilator. It’s weird but that’s the truth. I’m so satisfied with it.

From my point of view it’s well worth the money! Braun Silk Epil 9 deserves all the praises. Let’s hope it doesn’t break down for at least 5 years 🙂

Hi there, my name is Denisa! With over 10 years experience with epilation I made this blog to share my knowledge on using epilators and my tips on various hair removal methods.

Hi! My name is Denisa-Alexandra Cinca. I started this website to share my personal experiences with epilators.