Home
Waxing
Threading vs Waxing: Which is Better and Why?

When making the comparison threading vs waxing, we’re mainly speaking of two of the most popular facial hair removal methods.

Waxing is more widely known is Western cultures but threading is becoming increasingly popular, too.

I just have to say this from the start:

They’re both great, with some similarities and differences.

I’m going to talk in-depth about those and then you can decide which one would be more suitable for you.

There are so many methods to get rid of unwanted facial hair (facial razors, tweezing, epilators, the Bellabe, laser hair removal and electrolysis, sugaring, and even depilatory creams for face) but today, let’s focus on threading vs waxing. 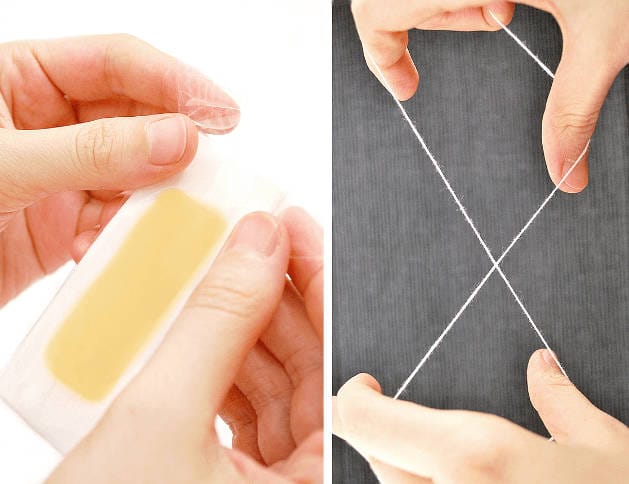 Women across the globe constantly search for methods to prolong the absence of hairs from their beautiful faces.

That’s actually an ancient concern, the modern woman doesn’t have a monopoly on it.

Threading was firstly used in ancient times in Persia, China, and India.

It gets its name from the cotton thread that is used to pull and twist the hairs and then remove them from their follicles.

It’s fantastic that a simple cotton thread can pull hairs from their root, just like waxing and epilators do.

It is primarily known for being a method to beautifully and perfectly shape eyebrows but it can be actually used on the entire face: upper lip, sideburns, cheeks.

It’s highly recommend for those with sensitive skin as it is less irritating than waxing.

Also makes threading a better facial hair removal method for those who suffer or have suffered from breakouts.

When I was in high school I stumbled over a beauty salon that had an amazing threading professional and it was an amazing experience.

It was just as great having my eyebrows waxed. And it’s just as good and the shape just as beautiful when my eyebrows are tweezed.

I love all three.

Threading is fast, too.

Shaping eyebrows with a pair of tweezers takes the longest.

What we call peach fuzz, actually known as vellus hair, after puberty, can evolve into terminal hair.

That’s actually the one that’s bothering us, the one that becomes noticeable even from a distance because it turns darker, a bit longer, and thicker.

As they get older, it’s very usual for women to get terminal hairs among peach fuzz, especially on areas like the sideburns and chin.

Peach fuzz can be annoying, too, especially for women like me who have dark hair.

In my case, it’s increasingly becoming more noticeable over the last few years – on my cheeks, my sideburns, and the jaw a bit.

It’s attacking me on all fronts.

There aren’t many women, including teenagers, who don’t remove their upper lip hairs.

The upper lip is the facial area that first gets terminal hairs and the majority of us end up searching for a hair removal method for the upper lip in our teenage years, as we barely enter high school.

The matter with waxing vs threading upper lip hair is simple:

If you decide to choose this route, there are a few things you need to know, I’ve written everything I know about facial waxing strips. I have a plenty of years of experience with them. For the past few years I’ve switched to using an epilator on my upper lip.

Threading vs Waxing: What Both Methods Have in Common

Why are we talking about waxing vs threading?

Because these methods are really similar.

Both remove hairs from the root, unlike razors or hair removal creams which both handle the hairs only at the surface of the skin.

Both facial hair removal methods can be used to remove hairs from the entire face:

Threading is mostly correlated with the shaping of the eyebrows but it can be used on the rest of the face, too.

After waxing or threading, you should always moisturize.

If you have really sensitive skin use an aloe vera gel. It soothes the irritated skin, the redness will go away faster, and there’s less risk of breakouts.

Last but not least,

Both can cause breakouts.

It’s not that common but it happens to some women, especially to those who have suffered from acne in the past.

If you have had zits in the past, it’s best to try threading first because it’s gentler on the skin.

Threading vs Waxing: Which Are the Main Differences

You might think that the main difference is that one uses wax while the other uses a simple cotton thread but that’s not it.

At least not from my point of view.

The main waxing vs threading difference is: waxing can be performed at home using either cold facial waxing strips (anyone can handle them) or hard wax if you’re experience with at-home waxing kits.

For threading, you need a beauty salon. It cannot be done at home all by yourself.

I used to use facial wax strips for my upper lip but I couldn’t imagine threading my eyebrows or any other part of my face all on my own at home.

But here’s the kicker:

Threading is more preferable than waxing because it’s not damaging the skin at all.

Only hair are pulled and twisted with a cotton thread, there’s nothing sticking to or pulling the skin.

That’s why, threading is highly recommended for women with sensitive skin.

If you wanted to remove facial hair using wax there are two options:

They’re one of the cheapest.

But also one of the best cold facial wax strips.

Before starting to use my epilator to remove unwanted facial hair, these were the strips that I used for years.

The package contains 10 double strips and 4 wipes for removing the residues.

The wipes are really good and you can use the same 2-3 times so don’t throw it out, just put it back in its package to prevent it from drying out.

Don’t use them to shape your eyebrows, you don’t want to make a mistake.

They can be used between the eyebrows but grabbing a pair of tweezers is much faster.

The Veet Facial Hair Remover Cold Wax Strips can be used on the entire face.

How to use cold facial wax strips on the upper lip:

The process is the same on any other area of the face, it’s very important to pull the wax quickly.

The Cirepil Blue Wax Beads represent one of the best at-home waxing kits at the moment. You can’t go wrong with hard wax, it can be used on the entire body as well as the face.

Hard wax is the best for handling all types of hairs and this waxing kit can handle coarse hairs, short hairs, thin hairs, and peach fuzz.

It’s great whether you want to epilator your upper lip hair, your chin hairs, sideburns, eyebrows or you want to move towards more adventurous territories, like giving yourself a Brazilian at home. Whatever hairs from whatever area you want removed, these blue wax beads will deliver.

The Cirepil Blue Wax Beads represent the best kind of hard wax: the type that sticks only to the hairs and not to the skin. It makes waxing efficient, fast, and a bit less painless and less messy.

It’s no wonder that this at-home wax kit is so popular and wonderfully praised.

This bag of hard wax beads is also pretty affordable and the quantity is plenty.

The only thing you have to buy are applicators because they’re not included. You don’t need muslin strips, just pull off the wax with your fingers once it hardens. It won’t take long for it to harden so, the process will be a bit faster, especially if you’re just going to be using this waxing kit just for facial hair removal.

The only thing you need to consider is that the bag of wax beads is all you’re paying for. There’s no warmer included, the price is just too low for that.

You can either get their Cirepil wax warmer but it’s expensive or you can use the microwave to melt the beads or pour the beads into a jar, put the jar in a pot with simmering water and wait until they melt.

If you find someone that knows what they’re doing with a pair of tweezers, you can get some stunningly shaped eyebrows.

But that’s where this method stops being useful.

If we were to compare threading vs tweezing, the big difference would the that threading is a lot faster because it can catch a bunch of hairs and remove them from the root while tweezers pull hairs individually.

That simple cotton thread, double and twisted, offers more defined and precise shape for the eyebrows.

Threading is fantastic for shaping eyebrows but a pair of tweezers can be just as phenomenal.

It all depends on who handles the instrument, whether it’s a pair of tweezers or a cotton thread.

What About Other Facial Hair Removal Methods?

In this post on threading vs waxing I think I’ve managed to explain one thing: they’re both amazing for facial hair removal.

But there are other options out there.

I just want to briefly mention them in case you thing that neither threading nor waxing are for you or you want to try something else.

In my opinion, epilators are the best alternative to the two subjects of our debate threading vs waxing.

The Bellabe is a facial hair remover.

It’s a simple spring shaped like a U that removes the hairs as you twist inwards and outwards.

The hairs are removed from the root.

It’s great for peach fuzz (thin fine hairs) but not for the coarse ones and definitely not for shaping eyebrows.

I would say that the Bellabe is the cheapest most effective peach fuzz remover.

Threading can offer women amazing eyebrows and it can remove hairs from the rest of the face too but I don’t know how many of you have succeeded in doing that all by yourself at home.

Waxing can be used to shape eyebrows, I had that done to me and it was incredibly quick and not painful, and it can also be used for the rest of the face and the entire body.

The difference is that I think that of the two, waxing vs threading, waxing wins because it’s much more approachable, easy, and it can be done at home by simply getting a good waxing kit that can be used on the body and face.

Leaving the hair removal world behind, it seems that now threading is also used as a facelift. It’s actually sugar threading but still an interesting fact.

I was completely surprised when I read it here.

To sum that up,

The specialists insert a natural thread into the skin and it takes up to a month until the substances dissolve into the skin, leading to a natural non-invasive facelift.

It sounds a little scary and it’s a lot different than what I was talking about in threading vs waxing but it’s supposed to be amazing, the latest fashion in removing wrinkles.

So, what do you think? In the threading vs waxing confrontation which one is the winner for you?

Hi there, my name is Denisa! With over 10 years experience with epilation I made this blog to share my knowledge on using epilators and my tips on various hair removal methods.

Hi! My name is Denisa-Alexandra Cinca. I started this website to share my personal experiences with epilators.